New way for Santa to get in OR new animal head above the mantle? 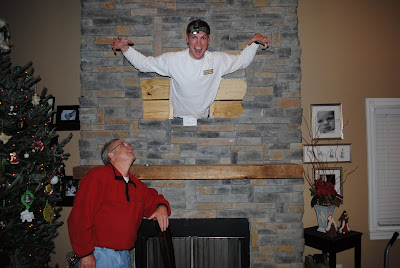 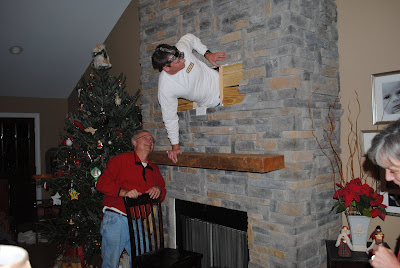 Kyle and his Dad got our mantle up (that I have been wanting for 3 years now) and I am sooo excited!!! I have to say that Hunter is very confused now and thinks Santa is going to come out from behind the TV on Christmas Eve night. We do have somne "discussing" to do with him on that matter still. But here is the finished product! 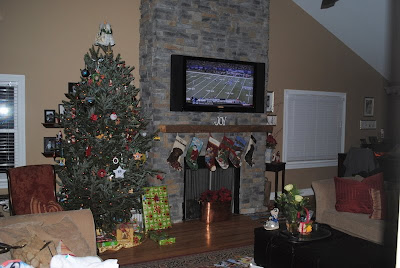 ...now I just need to do some cleaning and go get some more garland! I am so excited!
I have been on another unintentional blog hiatus for the past MONTH of not posting or reading blogs and I feel so out of the loop now!!!! So I am going to backtrack on what we have been up to (and then spend hours during the boys naps (hopefully)seeing what all of YOU have been up to too!). I don't know where the time has gone, but all I know is I feel like I am in a whirlwind of Christmas shopping, Christmas parties, pre-school Christmas baking, Christmas functions, birthdays, fundraisers and anything and everything that has been keeping me so beyond busy I am not sure what to do with myself or where the time has gone!
ANYWAYS
This weekend Grammie and Pop came into town bearing all kinds of goodies!
Kyle and I were so excited to finally move Drakey into a big boy bed and move the boys into a room together! Drake has been able to climb out of his crib since right before he turned 2 so this was a long time coming! But about 5 days before Grammie and Pop got here, we went ahead and moved Hunter into Drake's room...now their new room together. And went ahead and moved out his crib and changing table and move the guest bed back into the guest room to get it back up and running before they arrived this weekend. And to hopefully acclimate the boys in sleeping in the same room. Which, I think they love! But anyways, before their new beds arrived, we had them sleeping on a double mattress on the floor!!! What kind of parents are we??? (I think the coolest according to them because they thought that rocked!!!) But anyways, Kyle decided to move it on a night I had a function to attend and when I got back, this was what I found... 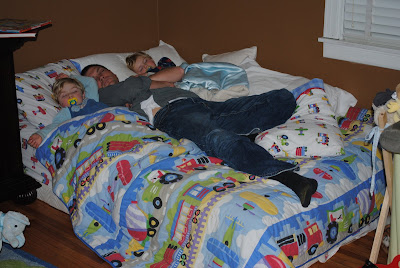 And after I woke up Kyle we went back in to take another picture... 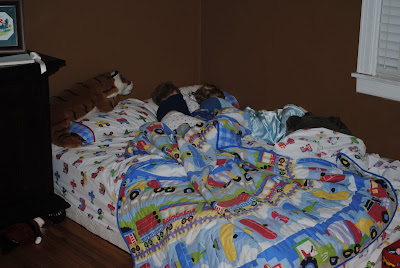 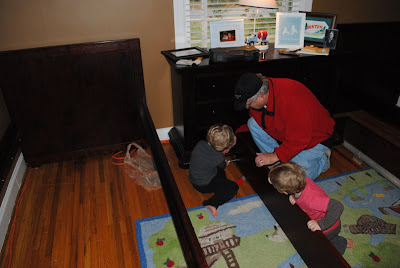 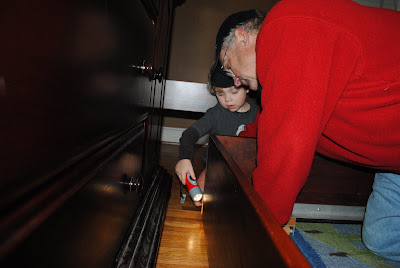 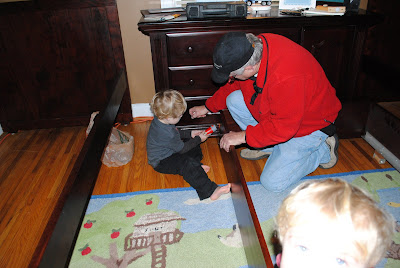 And Ta-Dahhh! Here is the finished product (minus a few decorating touches:) 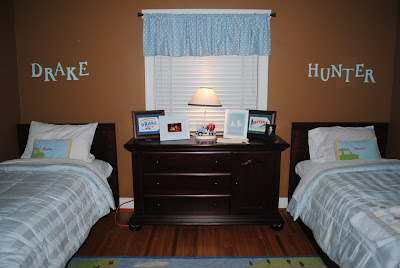 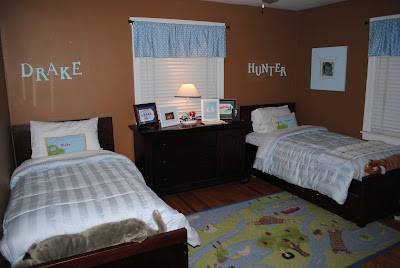 And then quickly onto some fun 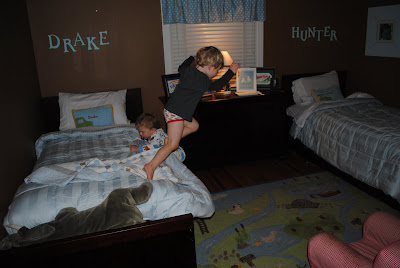 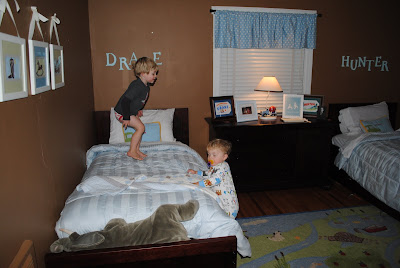 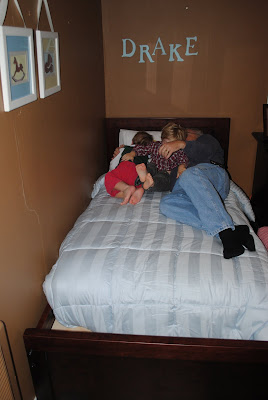 Yesterday afternoon Hunter and Drake each got to open one early Christmas present from Grammie and Pop...a Dr's Kit (very fitting for Pop!) and a Story Reader (which Hunter LOVES and is great for Toddlers!) 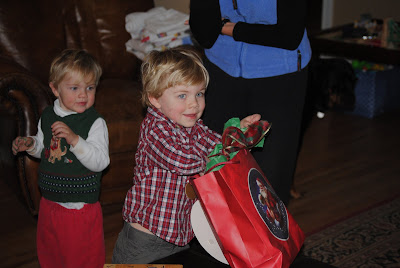 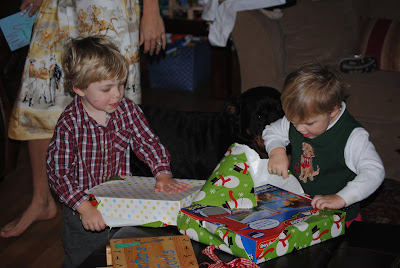 Both boys have been playing with both new presents all afternoon and all morning now. I think Hunter took my blood pressure, gave me a shot and told me I was so brave about 30 times so far! But that's okay, I love playing with him and I think it is sweet. 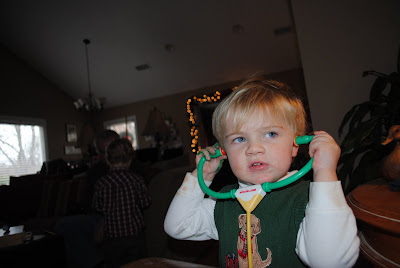 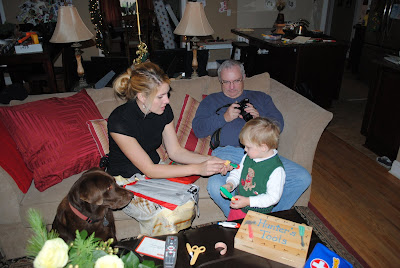 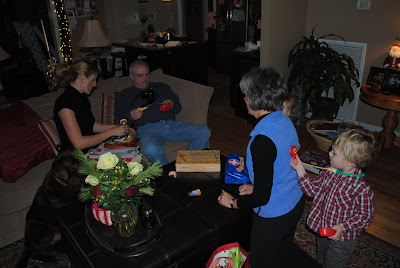 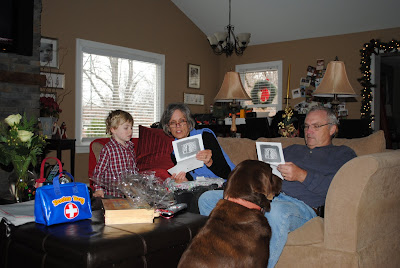 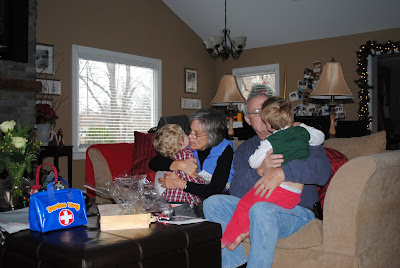 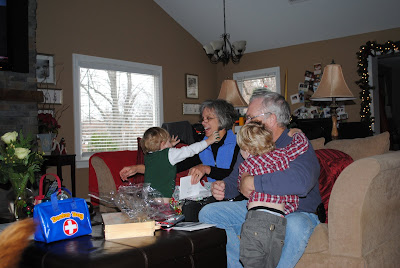 We had so much fun this weekend with Grammie and Pop (and quite a productive weekend too) and we miss them already!
Posted by Caroline Armstrong at 6:06 PM