We have had a crazy December.  Lots of good, and some bad.  I will begin with the first major change in our life and then next post go on from there.
This first change has rocked my world more than anything else, and I am forever changed.
We lost our sweet Divot on December 7th.
This has been one of the most painful experiences of my life and every single day I still miss him desparately.
I will never understand how he was able to love us so unconditionally.  A few days before Divot died, Kyle and I were at our small group church dinner and the verse we were focusing on John 12:31-34 and John 13:34, loving the way Jesus loves.  Which is unconditional.  As much as I strive for this amazing way to love, I fail to do it all the time.  But all I could think about was the fact that this is the only way dogs KNOW how to love.  Absolutely and totally unconditionally.  Whether you have been gone 5 minutes or 5 days, or whether you gave them a treat or not, or wether you walked them or not...when they see you, they greet you with the most excitement and love you could experience.  They do not hold grudges, they do not keep track of what you have done for them.  They just love. What an amazing gift the Lord has given us in our dogs to experience that.  And for me, it was no truer than in Divot.  His tender eyes, soft ears, sweet spirit and tail that wagged constantly will never be forgotten.  I love him and miss him so much.  Christmas was not the same without him.  He loved to swim, to run, to fetch, to go on walks, to lay right next to you wherever you were, to play.  He was tender with the boys and his eyes were always filled with love.   Each one of us has grieved in different ways and at different times.  Even poor Bella does not even chew up her bones anymore.  She misses him, and wonders where he is.
Divot's vet sent us a card a week after he died which I happened to get on my birthday with a quote from Eleanor Roosevelt that said:
"Many people will walk in
and out of your life,
but only
true friends
leave footprints
in your heart."
Below it was Divot's foorprint that they had taken I am assuming the day he died.  It was the best and worst gift I could have received then, but I treasure it because it could not be more true. 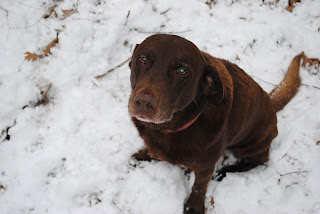 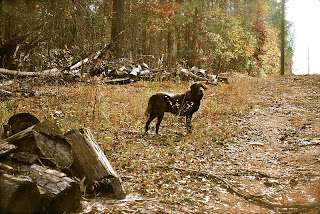 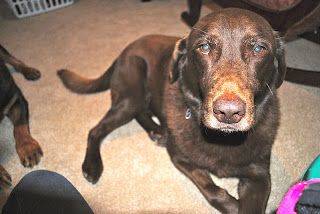 We have thousands of pictures of this sweet doggy which the boys and I are going through now and putting in an album, which I think has been so helpful for Hunter.  But more than showing you pictures, I would love to share with you an email a friend sent Kyle after we lost Divot.  In it it had this quote:
I don't know if you have heard of the southern writer Lewis Grizzard, but he was a famous southern author from the state of Georgia. Former Univ. of Georgia Coach Vince Dooley who was a friend of Grizzard's, gave him a lab puppy as a gift a long time ago that Lewis named Catfish. Catfish made the paper many times as a subject matter for Lewis and his stories. the following is a short blurb that Lewis wrote about Catfish after he had passed away.

He was smart. He was fun. And he loved to ride in cars. There were times he was all that I had. And now he has up and died. My own heart, or what is left of it, is breaking."
Posted by Caroline Armstrong at 7:23 AM