My sweet Drakey is a very big boy with a very big heart.  We sometimes call him "the gentle giant."  Last Saturday he was at a birthday party and actually WON an animal out of the claw machine (never in my life have I ever won anything out of those machines!!!). But he won a stuffed owl that he is so proud of and has become super attached to.  He named him Tweety. I am talking he sleeps with him every night... 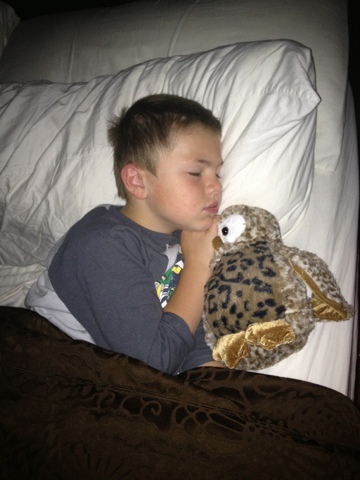 And when he is not sleeping with him, he took a nest I had downstairs I was using for and Easter decoration, dumped the contents out, took it up to his room and Tweety sleeps in his nest when Drake is away. Precious. I don't want my decorative nest back anymore. 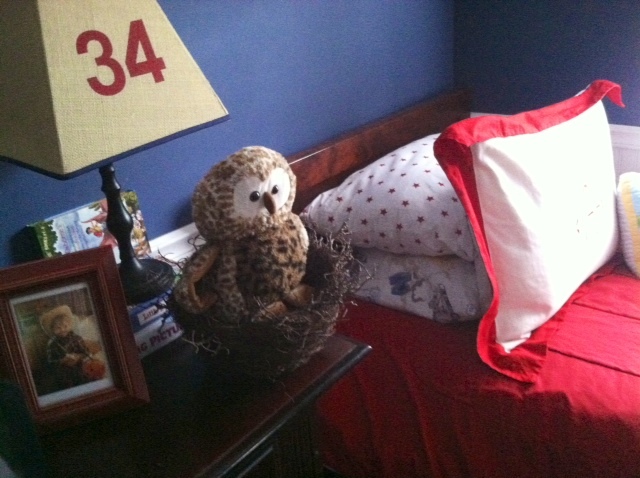 After all this Hunter said to me:
"Mommy, Drake is kind of weird"
I said, "Well I don't think so Hunter."
He said "Ehh, Tomato, Tomahhto"
WHAT! Where did he learn that??? Too funny that little guy is.

Teeth: during Spring Break both boys lost their second tooth. Drake was first while we were at the lake. It was so loose that I thought he was going to swallow it while he was sleeping or eating. So when we were brushing his teeth I told him we needed to pull it. He burst into tears for several reasons:
1. It was bleeding because it was so loose
2. He didn't know if the tooth fairy would know where to find him
3. kyle wasn't there and he didn't want to lose it without him
But literally I barely pulled and out it came. I reassured him that the tooth fairy would know where he was so we decided to Facetime with Daddy and show him that he lost another tooth. As we were calling, Drake ran into the kitchen, grabbed a tissue to wipe his eyes and told me that he didn't want his daddy to know he was crying. Uh! My heart just melts some times! But that is why he looks like he was crying. 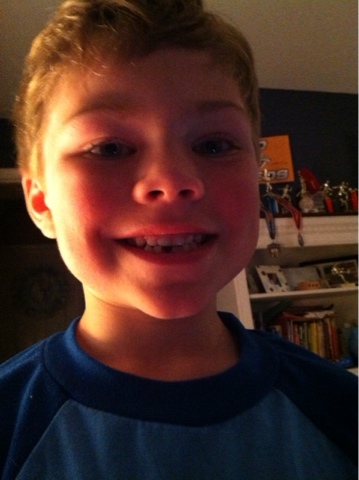 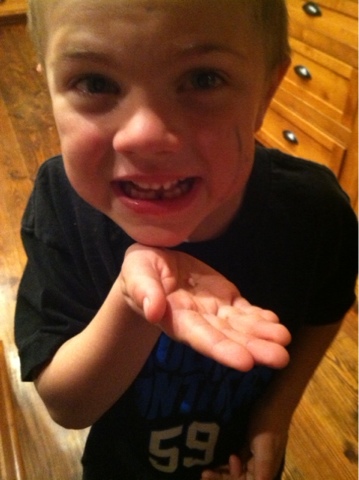 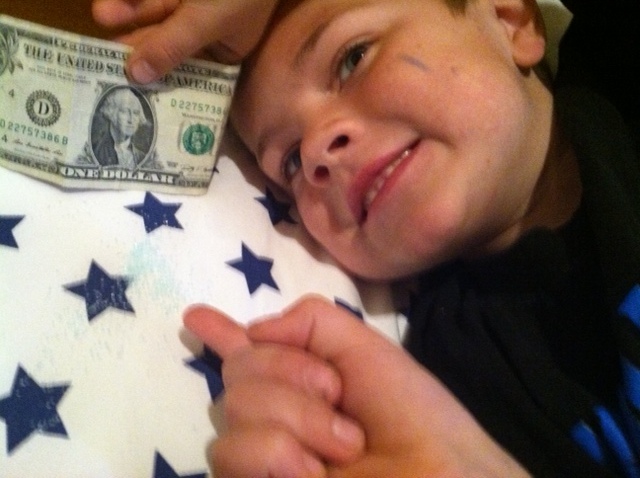 Now back to Spring Break. The 3 little boys and I went to the lake for a few nights to see Grammie and Pop. Kyle sadly could not go with us since he took time off to go to Disney World (which I STILL need to do a post on that!) But we had a great relaxing time. The weather was cool and overcast just like in Nashville but they had a great time playing TONS of baseball when it wasn't too cold. 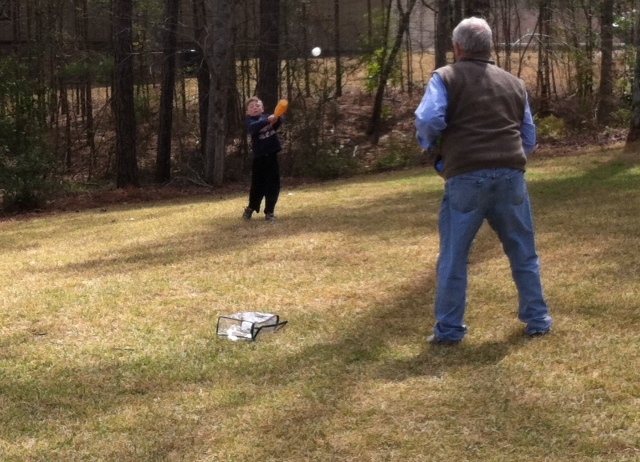 Pop and Drake built their cannon that they talked about building in Disney World (in lieu of buying a toy gun outside of Pirates of the Carribean) It was so cool! 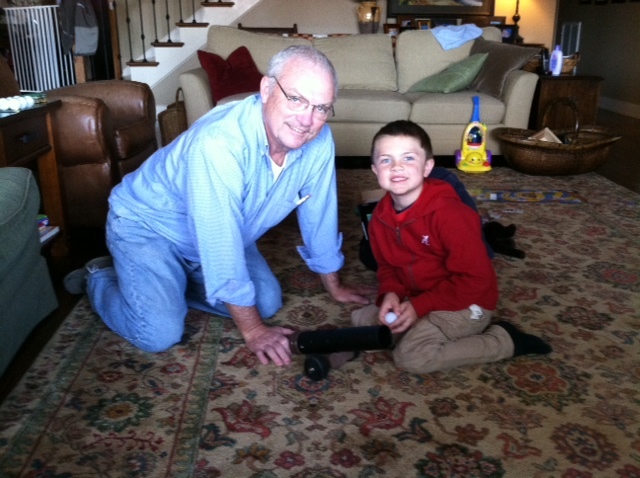 And this might be the coolest picture I have ever accidentally taken! Drake's face is hilarious, and I guess I took the picture right when the ping pong ball was shooting out which makes it look like smoke. 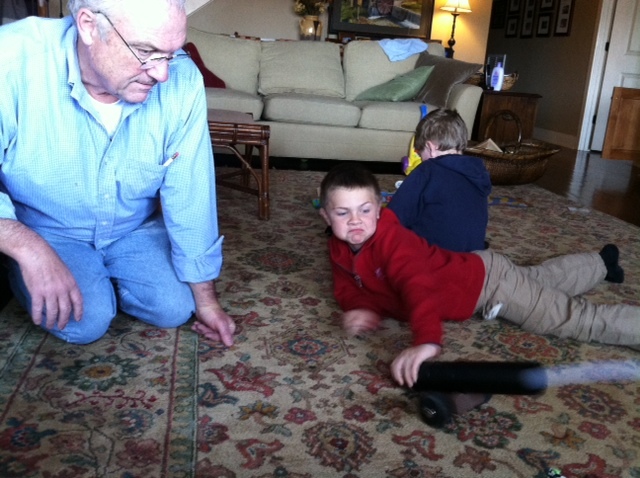 And we even got to be with Pop a little on his brithday. The boys made him a cork board for his shop to pin pictures of all the things he makes with his grandchildren (which is a lot and often!) 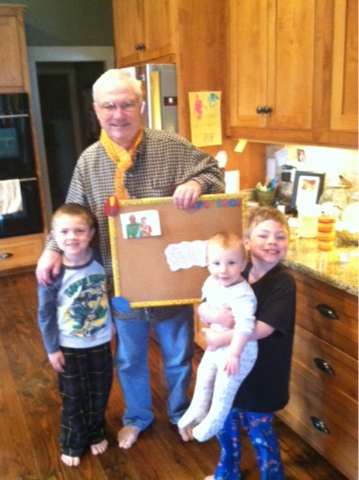 And sweet little Ty happy as a clam sitting with Pop. 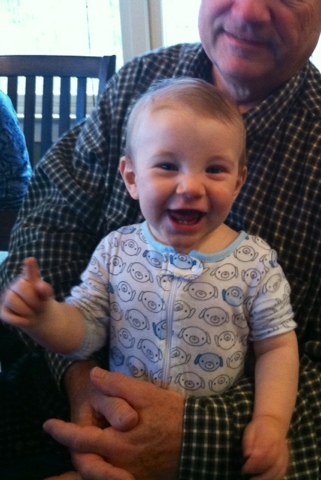 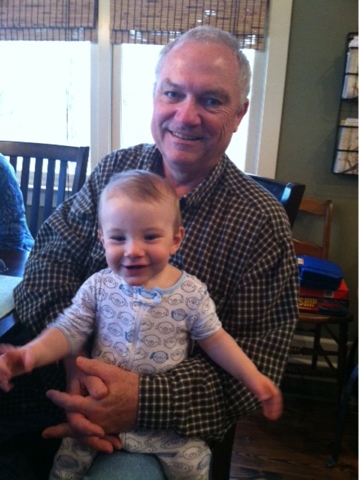 Posted by Caroline Armstrong at 12:02 PM