Well today sweet D had his first round of chemo.  I dropped him off around 8:30 and then picked him up at 4:30.  They had to run more X-rays just to make sure they still couldn't see any spreading throughout his chest and it was clear.  At least to the human eye.
I'll back up real quick.  Around September I felt a lump on his shoulder.   But he has a ton of fatty lymphomas (I think that is what they are called) so I didn't think too much of it.  But a month or so went by and it was not going away and he seemed to be gnawing on it an awful lot.  So I took him to the vet.  Dr. Rodgers, whom we adore, said it might be a mast cell tumor.  Which is a cancerous tumor, but very common and easy to treat.  Typically just with surgery.
So D had surgery a few days later, right after we moved into our new home, and Dr. Rodgers was confident he got it all so we all assumed that was that.  But they send these tumors off to the lab just for safe measure.  Well thank goodness for that because it came back stage 3 of 3 with a horrible prognosis.  Essentially it read 3-6 months without chemo, 6-12 with chemo.  Of course Kyle and I were devastated as was Dr. Rodgers...but we caught it so early and he got the whole darn thing and then some out during the surgery.  If it did not look like the cancer had spread anywhere, which is does not look like it has, then chemo is a safe step to take to make sure it has not planted little bitty seeds that we cannot see yet.  The type of tumor D had is one that is very aggressive and more than likely has planted itself somewhere else.  But the fact we caught it so early is hopefully a good sign that we can nip it in the bud.
We did not want to put D through chemo to extend his life for a few months, but to try and extend his life to a normal life expectancy.  He just turned 9 so he has got some good years left in him and I cannot fathom the thought of life without D right now.
He got to take his "baby"(which is the panda pillow pet Santa brought him for Christmas) to the vet, and was just as happy and as jolly as he could be when we picked him up.
I week down and 12 to go!!!!!!  These next few pics are all D and his "baby"  I have to get  video of him walking around the house with it.  He is so proud of it and walks around with it in his mouth but it is so big he trips on it all the time.  Oh he is so darn cute! 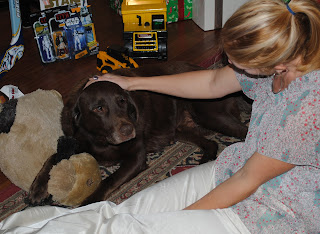 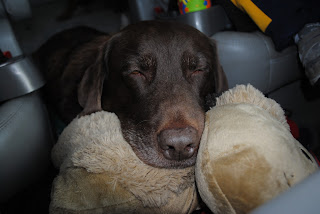 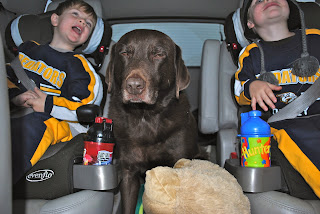 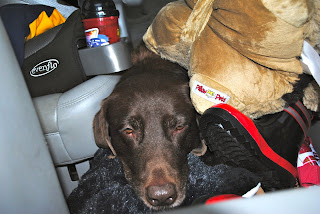 Posted by Caroline Armstrong at 10:18 PM