Well last Sunday, June 28th, Kyle and I celebrated our 6th wedding anniversary. We decided what better place than Vegas! I have never been there before and boy did I have a trip in store! I am so unbelievably blessed to be married to such an amazing man who loves his family with all his heart, works as hard as he can for us, gives for his family everything we could possibly need and makes each day so worth living. He is such an incredible father: so patient, so much fun, so kind, and so loving. I fall more in love with him each day and he is my best friend in the whole world. He makes every trip I take with him so fun and cannot imagine being there without him! We have so many pics, but don't worry, I will just pick a few! I was a little overwhelmed with Vegas since EVEYTHING is just so big and over the top! It was unreal! This was our first night there at dinner at Smith and Wollenskys 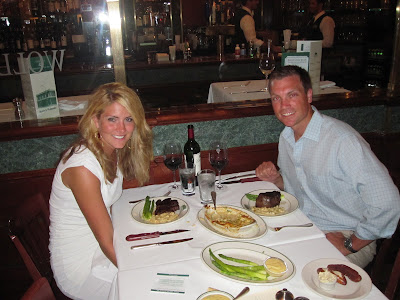 We had so many people tell us to eat there and have always heard great things about it, but I have to say we did not have the best experience. They did bring out a fun srprise anniversary dessert with champagne at the end though which made it a little better. 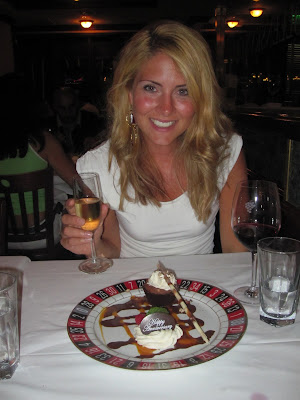 We decided to make the numbers that the white chocolate stick was pointing to our lucky numbers (red 25 and red 32) in the casino, but I can safely say, we DID NOT HAVE LUCK GAMBLING!!! Fortunatley we know our limits and can stop when we need to, but Vegas in general did not like our luck. That is okay though, money can't buy you love right?! 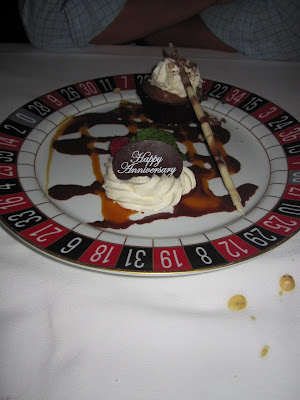 The next day we had a huge breakfast. 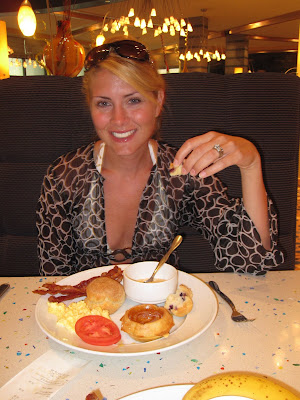 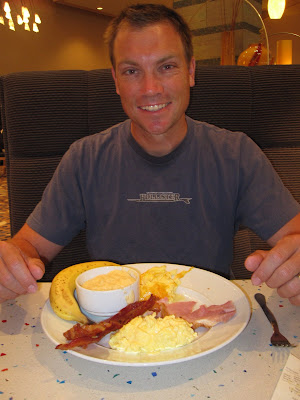 And then did a whole lot of laying out by the pool. Nothing like laying out full right? HA! 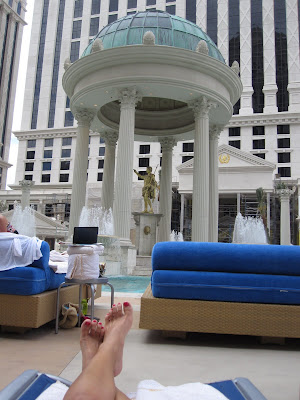 We headed to the Bellagio Hotel that night. Before dinner my hot hubby won some moo-lah. Well, let me re-phrase that. He won some money back... 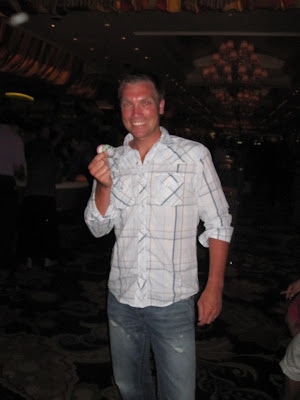 Afterwards we ate at Olive's, a Todd English restaurant, and we were able to make a reservation on the balcony which overlooked the infamous Bellagio Fountains. They went off every 15 minutes to a new song and was so neat to be able to eat outside overlooking them. 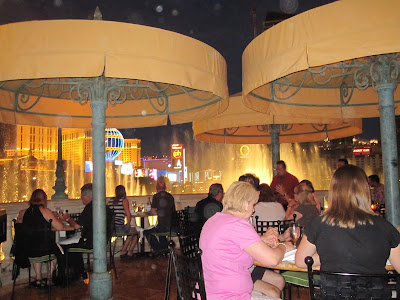 A few more pics in front of the fountains. These pics do not do them justice as to how high the water goes and I tried to uplaod one of our videos, but for some reason I couldn't get it to work. Oh well! 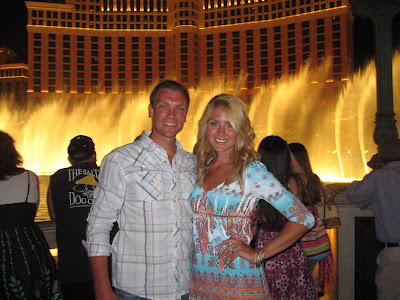 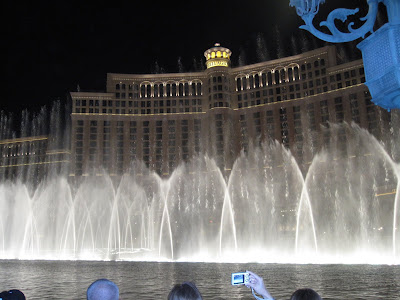 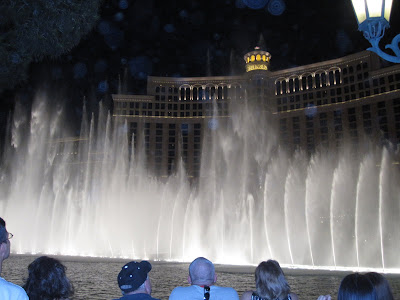 We did a little just walking around afterwards... All the hotels are insane but this was New York New York (if you have not been to Vegas yet, everything you see in the picture is the one hotel) and look closely and you will see the roller coaster that went around it. We kept saying we were going to go ride it, but always got too lazy laying by the pool to actually go to it. 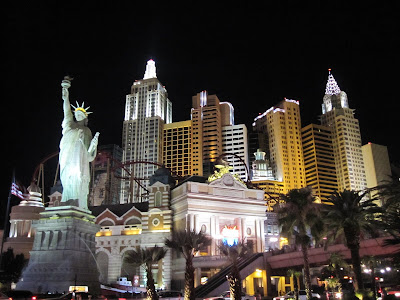 This is part of MGM Grande Hotel 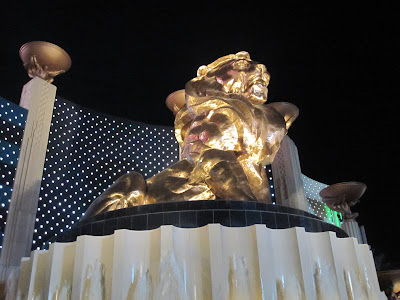 A pic in front of part of Paris 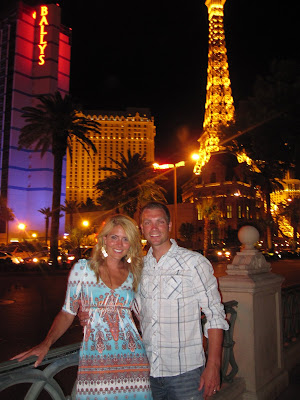 And then back in the front lobby of our hotel, Caesars Palace. It consists if 7 buildings, each atleast the size of Green Hills Mall if not bigger. And it actually has a ridiculous mall inside it with every girl's dream stores. It was ridiculously large and over the top! They all are though! 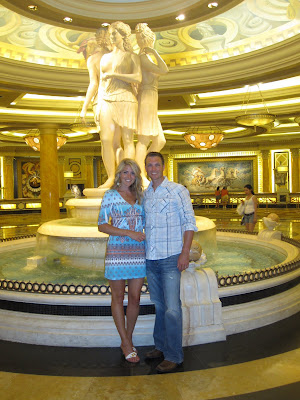 More eating lots of food and laying by the pool... 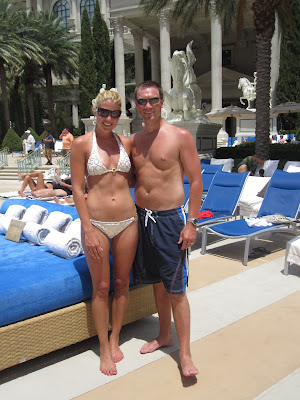 And then we went to the Wynn hotel to browse and do a little more gambling. We thought the Wynn was the best hotel we saw, but we had HORRID luck there gambling so I have mixed emotions about it right now. 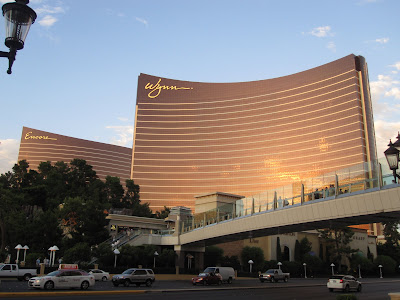 And then we went to the opposite side of the strip and ate at Mix in Mandalay Bay. It was the best restaurant we went to we thought but forgot to take a picture inside. It was so neat though! Google it if you have a chance! This was the only picture we got...of K's dinner! 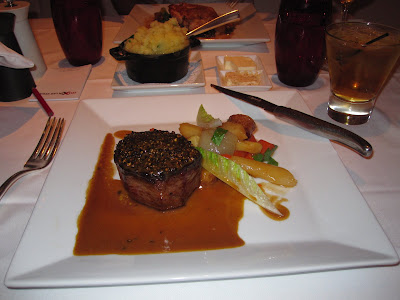 Afterwards we went into Paris to look around 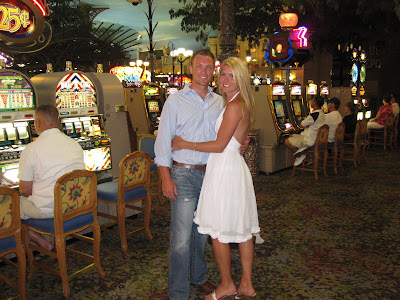 And then went back to Caesars where we ended the night at Pure, the club there. 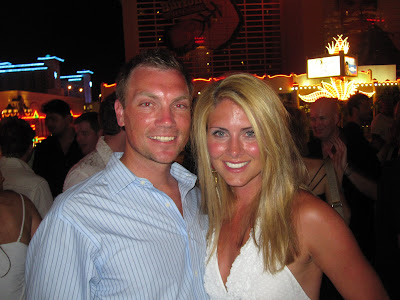 Posted by Caroline Armstrong at 8:56 PM