So....I never thought I would be one of those moms whose child wore cartoon themed clothes and shoes, but that was well before I knew why they did it. When a 2 yr old gets a fixation on something, there is noooo gettin away from it, until THEY want to. As many of you know Hunter has a massive obsession with Lighting McQueen from the movie "Cars" (Ynin queen he calls him). 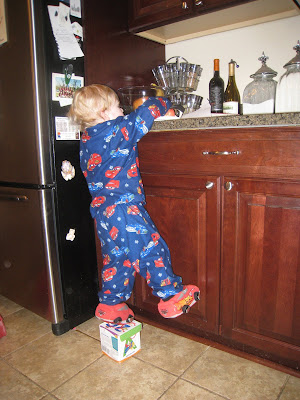 (Here he is being mischevious in a pair of Ynin Queen jamies and slippers)
I mean, I am talking pillow, blanket, 3 pairs of pajamas (I am sure you remember seeing them in the Christmas post since that was pretty much all he had on the whole time), shirts, slippers, plates, sippy cups, bowls, utencils, computer (thank you Aunt E and Uncle Will!), DVDs, and tennis shoes (which I had to buy about a month ago because he pitched a fit taking off his Ynin Queen slippers that are 2 sizes too small for his feet when he was going to Mothers Day Out, or anywhere for that matter). You can see how proud he is of his shoes... 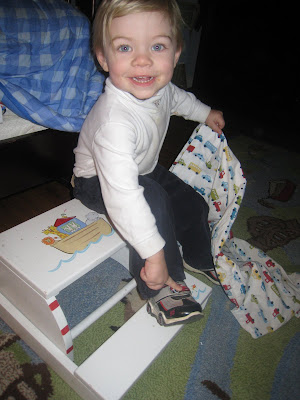 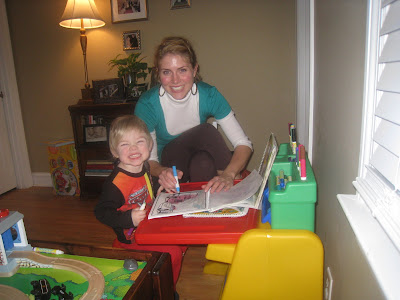 He has to always have something that has to do with Lightning McQueen on him somewhere (I have a love/hate relationship with Ynin Queen...love him b/c he keeps Hunty occupied, hate him b/c he keeps Hunter occupied). I seriously mean it when I say he is obsessed. The only way I can get his pajamas off in the morning is to explain to him that they are dirty and that they HAVE TO have a bath. He has to watch me take them to the dirty laundry and see them go into the washer. But don't worry, he still gets to wear his Ynin Queen tennis shoes! All this to say, he also got a bunch of the Cars cars for Christmas to play with. Mater (my fav), Ynin Queen regular version and covered in dirt version, Doc Hudson, and Sheriff. My mom also got him 4 more but I decided to wait and give them to him when he had been extra good, or when I needed a distraction or something. Well, yesterday was the day I gave him 2 more of the 4. He got Sally and Souped up super shiny Ynin Queen version. Let me tell you he slept with Sally, swung with Sally this morning. We even went to Bounce U (a place with a ton of massive jumpy things and slides in it) with one of my Best friends from Auburn, Julie McKim and her 2 boys, and we had to put Sally in my diaper bag because she HAD TO COME WITH US! Here is Hunty with his beloved Sally. 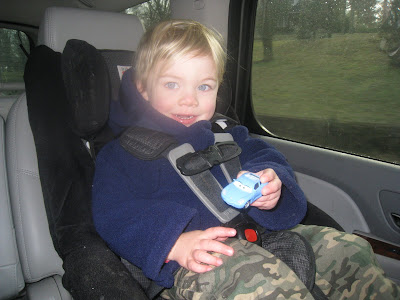 The only other thing that gets close to Ynin Queen stuff, is Thomas the train...we are in the thick of it!
Anyone else dealing with an obsession and has any tips on how to deal with it?!!!! Do I just ride out the storm?
Posted by Caroline Armstrong at 1:10 PM