This past Sunday was Palm Sunday (as I am sure most of you knew that already), the first day of Holy Week (great week to give up pacies huh?). The children in the church paraded down the aisle at the beginning of the service during the first hymn waving palm branches. The branches were typically used to welcome in kings and royalty, which was perfectly fitting for Jesus! Drake did a great job and held up his branch perfectly, where as Hunty, being in the midst of his 3's, decided to mope down the aisle.

"Your attitude should be the same as that of Christ Jesus: Who being in the very nature God, did not consider equality with God something to be grasped, but made himself nothing, taking the very nature of a servant, being made in human likeness. And being found in the appearance as a man, he humbled himself and became obedient to death—even death on a cross."
Philippians 2:5-8

I found this quote on a website where I was trying to find activities to do during Holy Week so that we spent more time talking about Jesus rather than Easter Egg hunts (which we have 3 to go to) and the Easter bunny. But this quote was also in our Bulletin this past Sunday morning and I just thought it was such a humbling reminder of the nature of Easter, of Jesus, and a model of how to live.

Sunday afternoon the boys cut out some palm leaves and we placed them around our Easter tree to be the centerpiece where we ate. It also was neat to talk about Jesus riding on a donkey walking on all the palm leaves and so significant that Jesus picked such a humble animal to ride on. 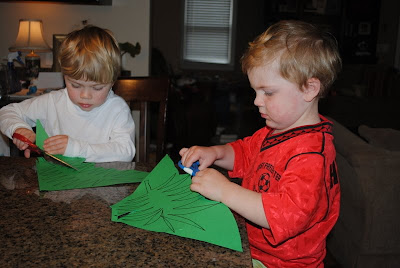 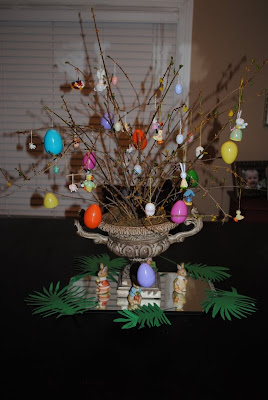 Monday was to represent the "Cleansing of the Temple"
Jesus went into the temple to worship and found men selling animals for sacrifices. These men were taking advantage of the people who needed to buy them by selling them in the temple courtyard to make money off the sacrifices:

"Jesus became very angry and said, It is written, 'My house will be called a house of prayer.' but you have made it a den of thieves. Jesus made a whip and drove out the vendors and their animals. He overturned their stalls and buckets of money."

This day was based on 1 Cor. 3:16, 6:18 and 2 Cor.6:16. About how our bodies are temples too and Jesus dwells within us. We also talked about how the Temple was to be a house of prayer, not a market or a place of "chaos." The website suggested we make soft pretzels as a reminded of our arms folded in prayer. There was a lot of "kneading" going on when we did that which the boys liked, and the pretzels actually turned out pretty good! 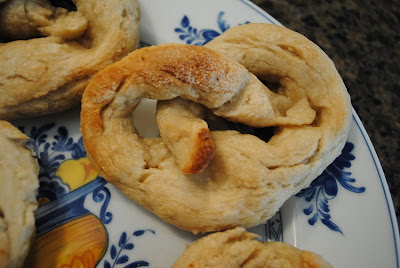 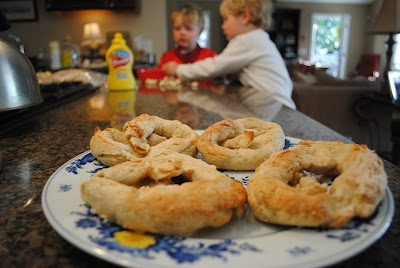 • Grease 2 cookie sheets. Take about 2 tablespoons of dough and roll it into *snake.* Shape it into a pretzel and place on the cookie sheet. Let rise one more time for about 5 to 10 minutes.

• Bring to boil in a large pan 6 cups of water. Carefully lower each pretzel into the boiling water. Allow to boil for about 45 seconds. Lift the pretzel out and place on the cookie sheet again. After each pretzel has been boiled,sprinkle with salt and bake in the oven for 10 minutes.

Tuesday we talked about Jesus Teaching at the Temple and based on Mark 12:28-34

What a reminder of Jesus himself. While we are still sinners, God showed his love more than ever by sending Christ who died for us!

Wednesday represents a Sweet Smelling Sacrifice at the home of Mary and Martha from John 12:1-7

Martha and Mary were friends of Jesus and their brother, Lazarus, was the one Jesus rose from the dead so they wanted to thank him with a special dinner. They ate at Simon's home, the leper that Jesus healed, so between Lazarus and Simon there was much to celebrate! Little did they know a few days later Jesus would die.

Tomorrow is the day of the Passover meal, the Seder Meal, which Kyle and I will go to before the Maundy Thursday service, and then of course Good Friday.

Overall, it has been a little difficult to discuss these things with the boys because they are so young I am not sure how much they are actually grasping. Especially since this is the week that Hunter has decided to start saying "poopy poopy" over and over again while were are saying the blessing at dinner (he has now been told that it is disrespectful and he would get a spanking if he kept doing that)

However, what I do know, is that hopefully they will take more from Easter than their Easter baskets and candy.
And on a lighter note, Drake was singing a song after dinner tonight that I could hear as Kyle and were finishing up and putting the dishes away. The few lines that I caught from it were
"I am going to my bird house. I have to get my Bible and a pillow" I was laughing so hard because he actually took one of the pillows off the couch and some random book that was sitting out and took it to the glider outside and sat there with them continuing to sing. Oh, and he was naked too.

Now, as for a pacie update. It is going okay. We let them each pick out a new toy at Target on Sunday as we discussed not having anymore pacies. (we have tried Pacie Fairy before, as well as mailing them to AM, our niece and it all goes well until the actual act and then they are a mess, so we HAD to just do it cold turkey.) Hunter picked out this plastic train set that you can put together on the floor (do we really need anymore trains???), which he has asked me several times if I would take it back to Target so he could have his pacie back... 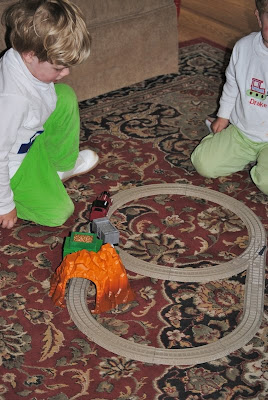 And Drake picked out a helicopter. 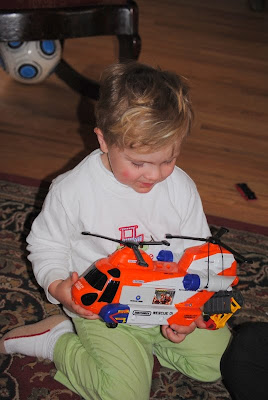 They both have asked for the pacies a lot, but it is getting a little better I think. Last night seemed to be the worst in terms of going to bed, but we are not on day 3 and I was told to give it 4 days, so we shall see!!!!

Oh, one more thing...Hunter's pacies have created a gap between his top teeth and bottom teeth which should (and will hopefully) go back to normal over the next few months, assuming we do not let him have the pacie anymore. I asked him to smile, which of course he would not do, so this is him biting his teeth all the way down together now. Hopefully I will track it over the next several months and we will see them come together! 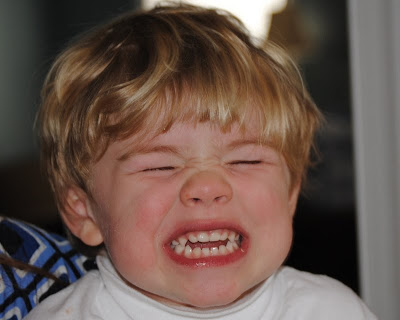 Posted by Caroline Armstrong at 11:49 AM