...Or should it be toddlers first haricut. I have to begin with this: If we ever have a girl, poor thing. She may not need a haircut until she is 5. If Hunter had been a girl I would not have touched it because it really was not that long. He was just looking a bit "straggly"...and he is 2 1/2!!!! If he had been a girl I could have easily put it back with a bow, but since that is definitely not happening, it needed a little trim. I mean, Why could we not get my nephew Christopher's hair. I think he has had like 15 haircuts so far and he was 3 in March.

And Drake's hair was not long either, he just looked like Kramer in the morning. 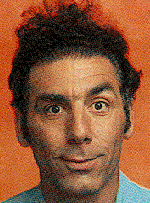 So we needed to take some of the fuzz out on top. And also Kyle could not handle his "curly mullet" any longer. I did love the curls, but I could put it in a ponytail...so I guess it was time for a littel trim there too. 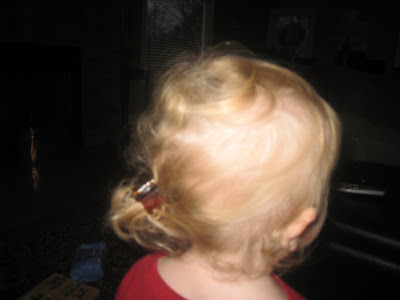 My poor children are not blessed with abundances of hair. But don't worry for all you sweet friends who stood by me in my fight to not cut off their curls, they just got a trim but there are still curls!!!!

Okay, so finally on to how it went down. We went to Snip-Its, a hair cutting place catered towards children with dumdums galore, a prize at the end, crazy animated characters (which were a little creepy to me), chairs for mommies right by the stools where they get their haircut, seat belts in the chairs so the kiddos do not fall out, and even children's music. However, don't be fooled...when I say childrens music you are probobly thinking Itsy Bitsy Spider, Twinkle Twinkle, etc. But NO...try turning on 102.5 or 107.5 and hearing those songs, but just being sung by children. For those of you who do not live in Nashville and have these stations, they are your typical pop stations. For example, when we walked in the song that was being sung in the sweetest of childrens voices was none other than "Distrurbia" I immediately thought to myself, please tell me that they computer generated these voices and these poor children did not have to actually read and sing these lyrics.
Okay, off my Snip-Its soap box and on to the haircuts. The first picture is of my children "waiting" thier turn for a haircut. 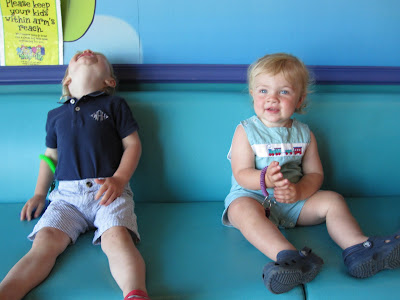 We only waited about 30 seconds and then Hunty went first.
He did surprisingly well! He got up in the chair, sat down, initially resisted the cape so that hair would not go down his back, but was soon easily bribed with a dumdum. He just sat there and was so good!
This is pre-cut, getting hair wet and brushed and inspecting dumdum #1 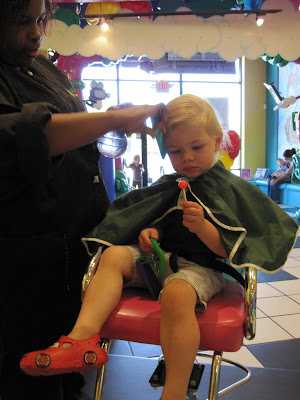 working hard on dumdum #1 before the haircut even begins 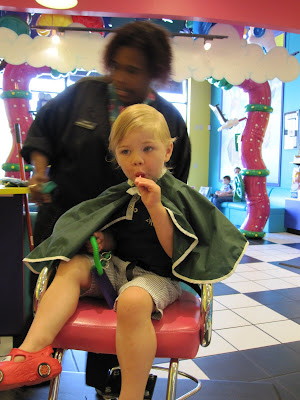 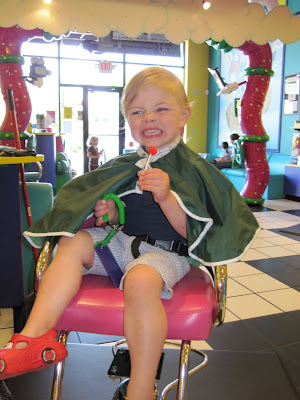 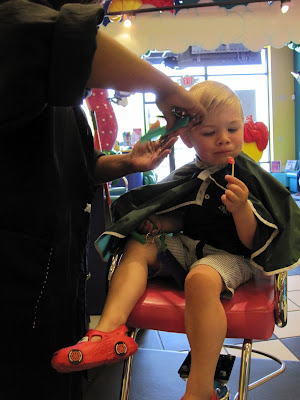 Hunty is watching some creepy video of animated combs and scissors dancing but doing a great job staying still (waiting for dumdum #2!) 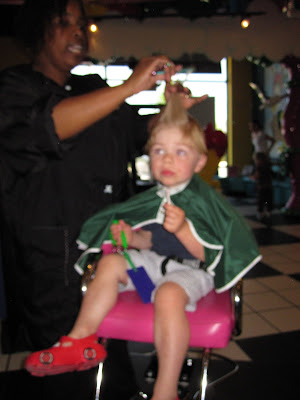 Haircut complete and Hunty giving me a fake smile... 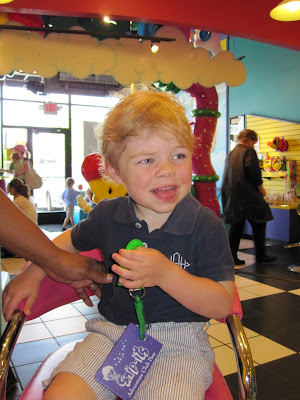 Now Drakey on the other hand did not do so well. He immediately went balistic when we put him in the chair and kept screaming and crying saying he was stuck. It was one of those moments that was so sad and I wanted to hold him, but was really funny at the same time. If he had not been screaming "stuck" it probobly would not have been as funny. I did ask if I could hold him while she cut it and she looked at me as if I were a 3 headed lady in a sideshow circus.
But she also was so incredibly sweet and told me that they have a ton of children that scream. She even said that he was not near as bad as some as she has had (i am sure she was just trying to make me feel better) But she was so kind and patient to him. I think cutting childrens hair is a true calling because the moment they started screaming I would say "Next!". Quite frankly I have no idea how she cut any hair at all between the body rocking back and forth trying to get out of the chair, head bobbing and arms flailing, but she did it, and she did a great job at that! Needless to say I was not able to take any pics during the cut, but this is a before 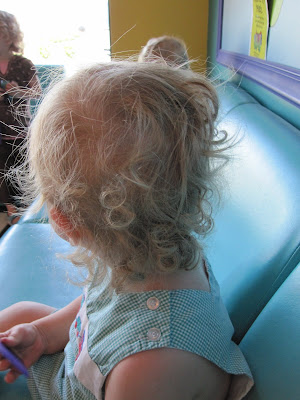 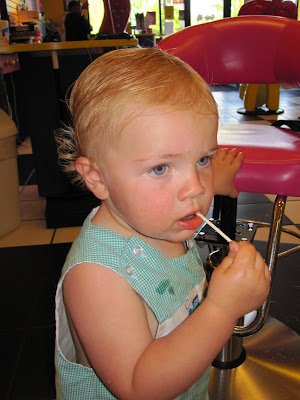 See, still a little curl in the back! And even more when it is dry 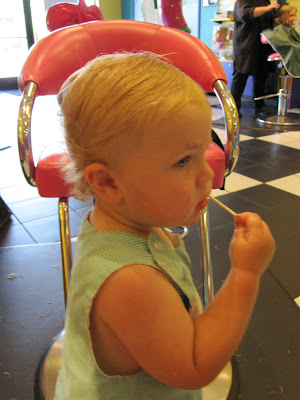 Halleluiah Hair cuts are over!!! Now on to obtaining the prize. They were given a little plastic card when we walked in that they stuck in a machine and a prize came out. Hunty went first again 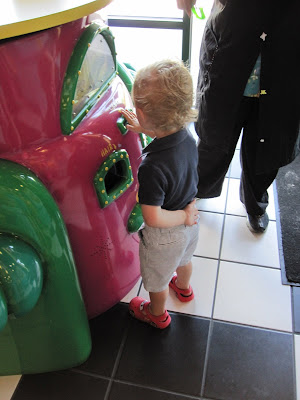 And then proceeded to take Drakes card out of his hand and do his too (poor Drake...he's gonna get Hunty back one of these days!) But this is Drakey holding his prize. How nice, a duck for Drake! 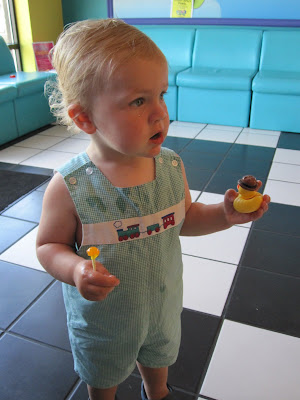 I also stupidly agreed to pay $5 to get a ridiculous certificate saying Hunter and Drake got their first haircut with the date and place on it. They wanted me to do $5 per child but I conviced them to just do 1 with both their names on it. But wait there is more. Also included in the $5 deal is a picture on another certificate of them after their first haircut. Since they both refused to sit still one more second I had to sit with them and hold them. I would have gladly bypassed the picture, but since I already paid for it, bygolly we were going to get it!
Here is our lovely picure we got with their hair stapled to it...(please notice Hunter's face. Every time the lady would say cheese he would close his eyes...on purpose. Believe me we tried 5 times but he was being too silly to behave.) 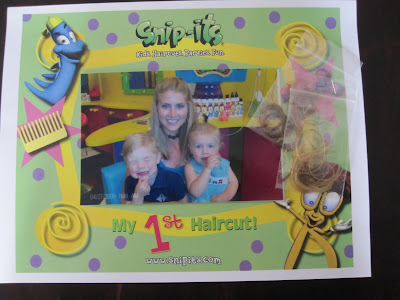 And to top it all off both my children went back to the machine to try and get more prizes out... 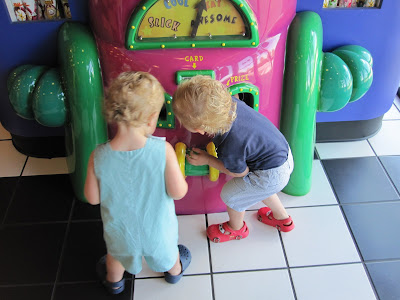 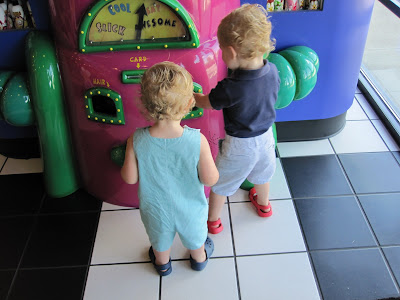 after a few dirty looks we finally made it out with 2 haircuts and no more tears! YAY!
Posted by Caroline Armstrong at 7:47 AM