To say the past few weeks have been difficult in our house-hold would be an INCREDIBLE UNDERSTATEMENT!!!! Hunter turned 2 in September and we had our share of struggles, but the whole "terrible twos" thing did not seem so bad. Aside from not being a great sleeper (Drake on the other hand has become a PHENOMENAL sleeper and I did nothing different for each boy...blows the whole "training to sleep" thing doesn't it? HA!!!) But overall Hunty could communicate GREAT, no tantrums, minded pretty well, loving, still funny but also a bit shy, pretty much a good road we were going down. And then he turned 2 1/2 and the walls came a tumblin' down!
Doesn't want to eat anything he should, doesn't want to go to bed at night or nap EVER, completely ignores anything I am asking him to do, refuses to get dressed EVERY SINGLE MORNING, hits, tackles, head-butts, boxes out and sits on Drake all the time (fortunately he does not do it to any other child...so far...). Slaps things out of Drake's hands and throws them in the opposite direction. Screams because he does not want me to get Drake out of his crib, or give Drake a sippy cup, or hold Drake, or read to Drake, or give Drake a snack, or let Drake play with anything! It is all just maddening. He has also become so independent so I really try and let him make more decisions on his own so he feels more in control (which was hysterical the way he went dressed to MDO this past Friday. I wish I had a picture, but he was wearing a Lighting McQueen PJ shirt, plaid shorts that are too big, ankle socks and his McQueen shoes). I honestly could care less what he is wearing at this point, but it is just funny! Anyways, as any other phase, it is extremely painstaking, but just have to remember that it will pass. I also still get weekly updates from Baby Center and for this week's tip this is what it said:

"You think your life is hard? Imagine being plunked down in a foreign land where you're not fluent in the language, you have to figure out how everything from a doorknob to a toilet works, and you're one-third the height of everyone else. Being a preschooler has its stresses. When your child seems overwhelmed, it's a good idea to look at what's going on in his world, slow the pace, and provide extra TLC — the same things you like when you're overwhelmed!"

So for all you moms with toddlers, expecting moms, or even if you think you might have children in the future, just remember you are not alone and your toddler isn't either!! It all makes prefect sense, and helps me step back, take a deep breath and realize he is going through just as much turmoil as I am right now. Just in a completely different way. But regardless, I have to remember he feels stresses too.
I have to end on a brighter note, Hunty tee tees in the potty all the time now and loves his big boy undies! 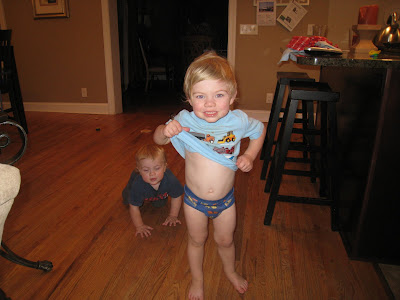 Posted by Caroline Armstrong at 5:16 PM