#1Yesterday was one of those days that despite how difficult Hunter can be right now, and how hard the days can seem, this was one of those days filled with moments that everything seemed perfect. I found myself several times wanting to pinch myself that this was really my life...in a good way. It all began when we decided that after 2 straight days of mid 80s, sunny weather that the plants needed to be watered...but instead Hunty just wanted to play in the sprinkler. Which was totally fine!
He would run through it, stick his face in it, follow it trying to drink out of it like a water fountain as it moved back and forth, hit his T-ball in it (which by the way he is a LEFTY hitter and can KILL IT!!!!!), dance in it, you name it he wanted to do it in the sprinkler which was hysterical. But even though it was HOT outside, the water was freezing and he would get cold so he would run to Kyle holding the towel, Kyle would wrap him up like a burrito and hold him for several minutes until he warmed up a bit and then back down he went to play again in the water. The water playing then into warm towel in daddy's lap was repeated over and over again and it was so blasted cute! Sadly I could not find our camera at the moment so do not have any pics of them, but it was so sweet.
I did however finally find it in the bottomless pit (AKA my diaper bag) after looking in there for the 10th time. SO i got a quick shot of Hunty in the sprinkler hitting the T-ball which he strategically placed in the sprinkler. 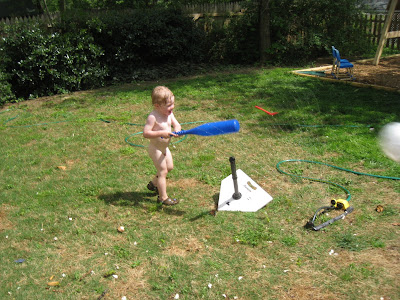 (Look to the right of the picture and the white blurr is the ball coming towards us! 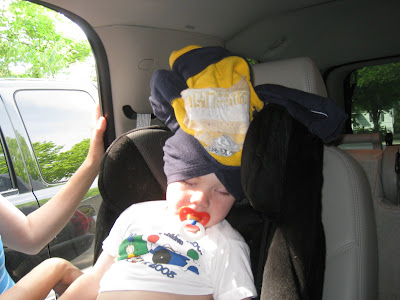 So after a few hours in the water Hunter finally started to get so cold that i realized it had been enough. I brought him inside, put on his warmest sweatsuit and within minutes he fell asleep...right when Drakey was waking up. By this time it was about 3:30 and we had to hit sonic Happy Hour to get out half price cherry lime-aids, and since I really didn;t want Hunty napping that late in the day anyways, we decided to go ahead and go. Hunter was still asleep after buckling him in his car seat and taking off his sweatshirt, well most of the ways anyway. It got stuck at the top of his head and there was born our "Sleeping Terrorist" Don't worry, we eventually got it off:)

#3 As we were listening to our Jack Johnson Curious George CD in the car, we like to play the "Sharing Song" (that is what the song is called) since Hunter has gotten to where he does not like to share as much anymore. He has loved this CD since he was just a few months old and can actually sing along with it now but what was so ironic was after the song was over he said "This is MY sharing song!" Need I say more...

#4 At dinner tonight this is what I found myself telling my children:
"You need to eat pizza if you want more fruit." Does that sound weird to anyone else??? I never thought that sentence would come out of my mouth. 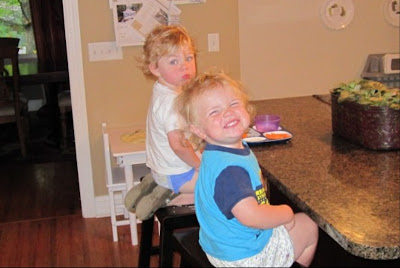 By the way, this is the last picture of my boys before they are about to get their FIRST HAIRCUT EVER!!! Neither one has ever had one but that is about to end...I might cry!
Posted by Caroline Armstrong at 6:02 PM